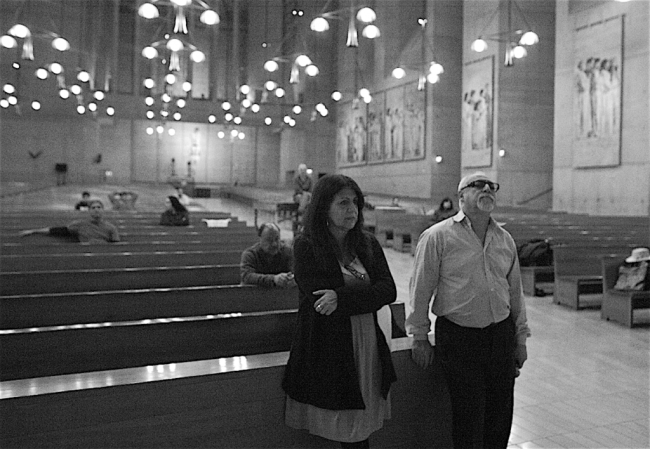 Thirty years ago, when we were young and beautiful, we were part of Los Angeles’s theatre revolution. At its heart was the Los Angeles Theatre Center, and the seed within that heart was the nascent Latino Theater Company, founded by José Luis Valenzuela, its artistic director, and the company’s playwright, Evelina Fernandez.

I first met José Luis and Evelina in the offices of Bill Bushnell and Diane White, who were running the Los Angeles Actors’ Theatre, where I was the dramaturg. José Luis, Evelina, and a trio of loyal actors were founding a theatre lab. We went on to build and open the Los Angeles Theatre Center, which housed that lab. After the Theatre Center folded as an organization in 1991, the Lab became an Initiative, and finally a Company; ten years ago the Latino Theatre Company took over the lease and now runs and programs the house we all built together.

Today we are older, and beautiful in a different way.

“We learned it takes a long time,” José Luis said. “It takes forever,” Evelina added. We were having breakfast in Downtown LA’s Arts District under a cloudy sky.

“Thirty years ago it didn’t matter if we were great or not,” José Luis said. “We were Latinos, off to the side.”

Back in that day we all did theatre because we could. We did diversity before it was a common word; we called it “multi-culturalism” and made it our by-word not out of political correctness but because that’s the way we experienced our world. Our theatre was new and fragile, the stuff of sweat, long days and longer nights, new playwrights coming into dress rehearsals with fresh pages, preview performances where offended audiences might not show up for the second act.

“You remember when we were young, you and I?” José Luis sipped his coffee. “It was about the Wonder Boy. So if you were not brilliant at 27, you were a loser. Some of our friends, who were brilliant at that age, are gone now. It got so bad for them after that first year or two of success. It was easier to disappear. But we lived through it.

“That is just the fate of American culture and our theatre. We went through performance art, post-modernism, minimalism. We struggled with the idea of important theatre that matters, theatre with a clear narrative – which for many years was not what the national dialogue was. Somehow, that’s coming back. Once again, the story is important.”

It reminded me of Beckett. I can’t go on. I’ll go on. “I just keep putting one foot in front of the other,” I said.

“It’s necessary,” agreed Evelina, reflecting on why she writes her plays. “These stories are necessary for the country and the world to understand that there’s a whole other narrative that isn’t being told about my people. We’re stubborn, we believe in it. We feel we have to do our part.”

“But here’s the problem, the contradiction, I wrestle with,” I began, heading into the complications of the art. “It’s important to change the narrative—but it is so hard to get butts in seats. Where is the audience for the important work?”

“It’s not the lack of an audience. It’s how do we support that audience and change what success means in the theatre?” said José Luis. “People see income as success. But theatre’s not about profit. We had 12,000 people come to see 19 plays in one month. That’s a lot of people. We sold the tickets for $5, so everybody came. We’re doing the Mexican Trilogy right now, and it’s a huge production. I have to sell 2,000 tickets at the regular price. Then I can sell the student tickets at $15. There are already 1,000 students who want to come for $15… but that’s only $15,000. I wish we could sell all the tickets for $15… then we’d be sold out! There would be no empty seats. But because wealth is not equitably distributed to the arts, we have to be the ones who keep searching for paths to financial stability.”

“It didn’t used to be that way,” I said. “When western theatre started in Athens 2,500 years ago, theatre was considered so important to the fabric of society that the audiences were paid to go to the theatre. They didn’t pay to go. They were paid to show up. One day we should get a gigantic grant and do a play where the audience is paid to come see the play. It would have to be a very political play, because it’s an inherently political act, to pay the audience to show up.”

“That’s what they do in politics” nodded José Luis. “They pay people to show up, because they need them to send the message out.”

“That would be ideal.” Evelina agreed. “Let’s do that.”

Could a theatre do something that revolutionary? José Luis and Evelina had to get to rehearsal, and I had an appointment with a laptop. It was time to end breakfast, but of course the conversation would go on. Theatre is vital because it becomes the canvas on which all social and human issues are splattered, no matter how young or old you are.