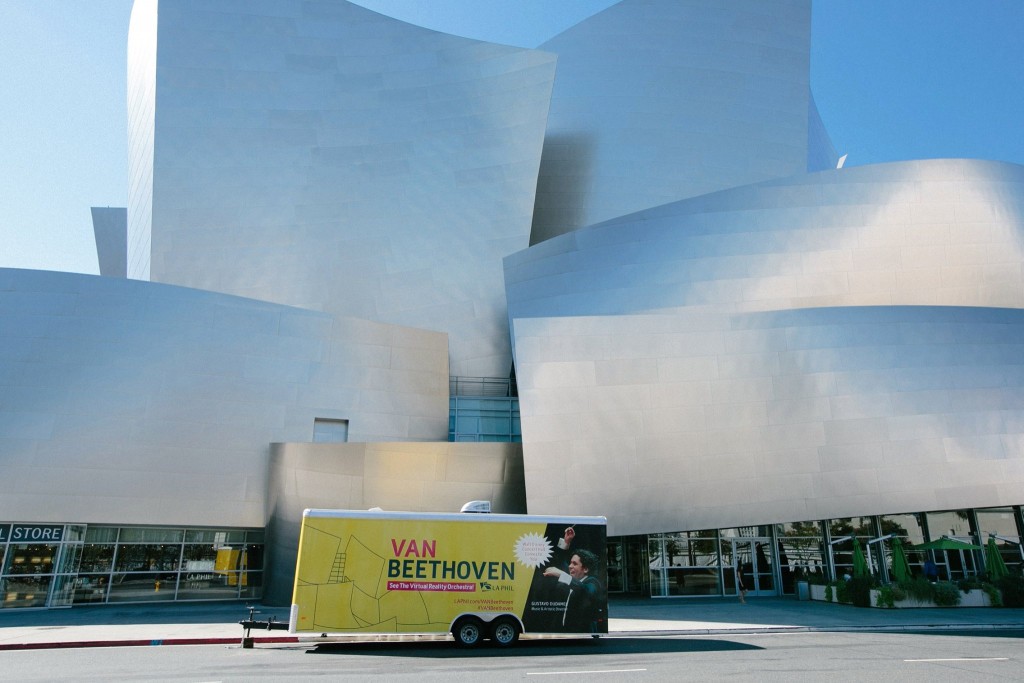 What is it like to experience live classical music for the first time? From the Slate.com Future Tense blog, Lily Hay Newman reports on this mashup of classical music and here-and-now technology as the LA Philharmonic brings new meaning to “concert in the park”. LA Phil is offering the public the opportunity to experience this virtual reality (VR) presentation of the beginning of Beethoven’s popular Fifth Symphony via a vehicle called Van Beethoven. Part of Conductor/Artistic Director Gustavo Dudamel’s Immortal Beethoven Festival, Van Beethoven is offered to the public at various Greater Los Angeles locations from September 11 through October 18.

Newman, a classical music enthusiast, explains the unique value proposition of a concert film: “I can be right next to the musicians, or look at them from angles that would never be possible in real life. I can also face the conductor, in this case L.A. Phil music and artistic director Gustavo Dudamel, as he conducts – something that is almost never possible in a live concert. If you know a little bit about how playing instruments and conducting works, this is all fascinating.”

While Newman goes on to say that donning VR goggles alone doesn’t necessarily mint classical music lovers, she acknowledges it’s a step in the right direction.   “…I would think that for most people, getting up close and personal with musicians as they play isn’t going to make classical music more accessible by itself. You still don’t know the difference between an oboe and a clarinet.” If the outreach effort is successful, it will reach people with classical music limited exposure and inspire a curiosity and appreciation for the art form. As Newman continues, “As orchestras around the country attempt to put together compelling programs for new audience members, they often rely on recognizable and relatively short pieces to keep concerts moving. But this is only the first step in exposing people to the true joy of classical music.”

I talk frequently about the challenge creatives face in finding their audience, that tribe of enthusiastic fans that return again and again to find out what’s new and contribute to the dialog. I think it’s a fascinating lab experiment for a world class orchestra, cutting-edge technology and a humanistic touch, and I imagine LA Phil has more in the works, to reveal the “joy of classical music” Newman describes. This effort is reminiscent of others across the country, such as Detroit Institute of Arts Inside|Out campaign (see link, below). As the arts are limited in their ability to pull new patrons into their brick-and-mortar locations, they’ve adopted the initiatives other nonprofits, such as health care, use to get their services to meet people where they are. To that end, I say Bravo, LA Phil team!

A link to Lily Hay Newman’s piece from Slate.com: http://www.slate.com/blogs/future_tense/2015/09/08/los_angeles_philharmonic_experiments_with_virtual_reality.html

Even if you’re not in the area to enjoy the show, the LA Phil website has details about VR apps. Visit this link for dates and FAQs. http://www.laphil.com/vanbeethoven/dates

For more about the Detroit Institute of Arts Inside|Out campaign, follow this link. http://placemaking.mml.org/how-to/dia-inside-out/

Please share your experiences if you experience Van Beethoven!

Image and video courtesy of the Los Angeles Philharmonic