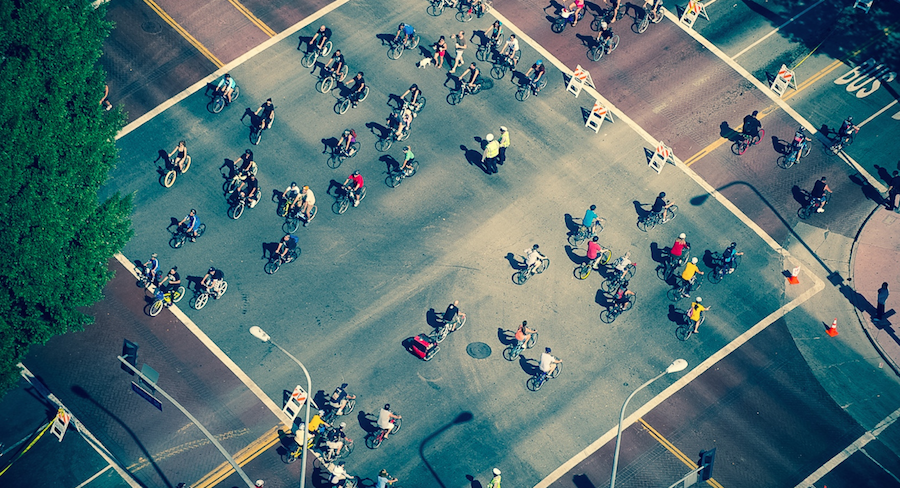 Why, for example, are people prowling the streets of Bristol, England, right now hoping to discover Banksy’s next work, while few notice when new street art appears in nearby Chippenham? Why is the worldwide movie-going audience buying advance tickets for Andrew Garfield in Spider-Man 2, and running away from Johnny Depp in Transcendence?

What makes culture move beyond the small embrace of its creator to become part of the bigger social fabric? Recently, I’ve been exploring these questions, seeking Laws of Culture that obtain independent of money. Because with a gigantic marketing budget, you can always buy awareness. But no matter how much advertising you buy, you cannot purchase desire.

When we look into the Laws of Culture, we’re really investigating desire: what causes us to experience it and want to share it.

Morning air brushes your face. As your legs cycle in rhythm, you wonder why no one else is on the street. Do you have the wrong day? The wrong time? Then, rounding a corner, you see another bicyclist and another. Soon there are five of you, now twenty, and you fold into the energy of the cycling pack, the group awareness, the power of your wheels on the pavement that starts to make cars move aside.

You anticipate, sensing excitement two blocks away, but nothing can prepare you for the emotional flush as you make the next turn to discover 10,000 more cyclists, of all ages and descriptions, at the starting point of today’s CicLAvia.

This is the experience many LA residents feel on occasional Sunday mornings in the city.

CicLAvia is a day when cars are banned from city streets, and bicycles and pedestrians take over. It’s an opportunity of urban idealism. Begun in Bogotá, Columbia, in 1976, where it is called Ciclovía and the central city closes to automobile traffic every Sunday, it has inspired similar events in more than ten countries and dozens of US cities.

No American city has adopted it more than LA. You would never have expected CicLAvia to grasp a firm hold here, but it has the city in its thrall. LA’s CicLAvia is so successful that one recent day saw 150,000 people bicycling from LA’s downtown to Venice Beach, and CicLAvia’s organizers have just launched a crowdfunding campaign to make it a monthly event. (Support them! I have!)

What would make Angelenos ditch their cars for a day? Let’s call it one of the Laws of Culture: The Law of Discovery. When we discover a way to do something we secretly hope to do, we’ll do it. LA’s car-love is mythologized in the sense that it is overstated. Most Angelenos feel ambivalent about their cars. We view then as utilitarian requirements in a spread-out city without sufficient public transportation.

When a work of creative culture, like CicLAvia, gives people the feeling that they are discovering something new—instead of making them feel force-fed—it creates desire. It is more likely to be shared and to gain momentum. CicLAvia creates the feeling of discovery because its organizers constantly change its route, and because participants approach it alone on bicycles, then suddenly, in turning one corner, discover they are part of a vast collective enterprise.

This is one way that creative culture moves and spreads—through the emotions of anticipation and discovery. It’s the Law of Discovery, and CicLAvia illustrates it on city streets for all to see.