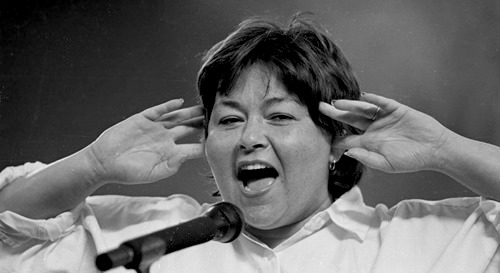 May 29, 2018: The day Starbucks closed its stores for implicit racial bias training; Roseanne Barr made a racist tweet; ABC, in reaction, canceled her show; CNN held a live feed of a Trump rally in Nashville, with a lower-third saying they were waiting to see if he’d address Roseanne’s racism—which, of course, he didn’t, while CNN once again gave him a live TV podium; and a Southwest Airlines employee confronted a woman flying with her biracial son, asking her to prove the child was hers.

May 30, 2018: The day President Trump said nothing about racism, and instead demanded that ABC apologize about “HORRIBLE [sic] statements made and said about me.” Trump’s non-response to Barr’s racial slur echoed his two-day delay in responding to white supremacists killing a protester in Charlottesville, Virginia, in August, 2017. The lack of immediate condemnation is a coded dog whistle to his followers, acknowledging and encouraging their racism and bias.

You start out in 1954 by saying, “Nigger, nigger, nigger.” By 1968 you can’t say “nigger”—that hurts you, backfires. So you say stuff like, uh, forced busing, states’ rights, and all that stuff, and you’re getting so abstract. Now, you’re talking about cutting taxes, and all these things you’re talking about are totally economic things and a byproduct of them is, blacks get hurt worse than whites.… “We want to cut this,” is much more abstract than even the busing thing, uh, and a hell of a lot more abstract than “Nigger, nigger.”

It’s happening again, in coded terms, in the predominant television ads for Republican House races: according to a study published in USA Today, they focus overwhelmingly on immigration. In case you have missed all the news stories and facts about how gigantic a problem immigration is, don’t worry; you haven’t. Immigration is not a gigantic problem. But it does code to the language of us-versus-them, or, more specifically, “us white people” versus “everyone else.”

Yet there’s a flip that has happened in America. Once-coded language is becoming uncoded; racist people feel there is no longer a need to code. That’s why Barr can tweet what she tweets. While implicit bias is increasingly addressed, explicit bias has been normalized. A lasting artifact of the Trump presidency—in addition to future instability and further redistribution of wealth upwards—will be that people no longer fear the social stigma of being openly racist, sexist, homophobic, transphobic, Islamophobic. Prior to Trump’s candidacy, some Americans may have felt these things, but said them behind closed doors. Today, they feel safe saying them in the open.

ABC’s cancellation of the Roseanne show does nothing to change this. Her right-wing supporters have rallied to her defense, with false analogies about when Jimmy Kimmel compared Trump’s hair to an orange orangutan. Why, they demand, is it wrong to compare an African American woman to an ape, and fine to compare Trump to one? These are the people who counter “Black Lives Matter” with “white lives matter too, you know.” It’s rather impossible to explain the difference to them. Believe me, I have tried.

Despite the fleeting, toothless condemnations of racist language from a few members of the Republican party, it is quite impossible to feel that Trump supporters are anything but racist—either overtly through explicit bias, or covertly through implicit bias, although that implicit bias may be unconscious or, more accurately, just something they don’t care to confront.

The evidence is there, even if Trump supporters choose not to look at it. For the rest of us, we have to call it out loudly and repeatedly. History shows us that nationalist, nativist, racist fervor is nearly impossible to contain once it is unleashed…and if it can ever be contained, it will take the work of an entire generation.