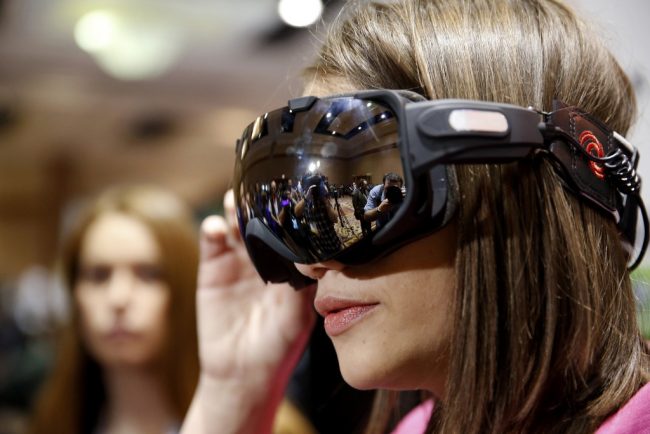 Vegas is less than 500 miles away from Park City, and as I got in my car, back in January, after a week at the Consumer Electronics Show, I knew I had a few things to share with indie filmmakers.

There is, after all, a connection, and it’s longer than Interstate-15. CES 2014 was all about gadgets and gizmos — the things with which we make and watch movies, TV and webisodes. It is an overwhelmingly gigantic trade show, where 155,000 people push and shove their way through 2 million square feet of floor space.

I have panic attacks just thinking about it. Yet even bigger than the crowds and the new, curved-screen TVs were the ideas I encountered, ideas that have immediate relevance for all filmmakers – be they mainstream studio creators, or those in the world of indie film.

1. Content is still king. What did the big tech companies talk about? The content they offer and enable. Jeffrey Katzenberg of DreamWorks Animation did a cameo appearance for Brian Krzanich, the CEO of Intel. Sony hosted Vince Gilligan of Breaking Bad. Cisco CEO John Chambers gave us Sarah Silverman. Yahoo’s Marissa Mayer brought onstage the Saturday Night Live Weekend Update team, John Legend and Katie Couric. Filmmakers—you make content, even though (thankfully) you call it “movies.” Without your movies, there would be no reason to buy a wall-size TV.

2. But it must WOW! Sony CEO Kazuo Hirai, the best corporate presenter of the bunch, spoke repeatedly about the Wow-factor—that if something doesn’t make you say “Wow!” it’s just not good enough. That’s true about movies too. Filmmakers, a lot of your movies simply are not good enough: They don’t make us say “Wow! That was great! I have to tell my friends right away!” As we at Entertainment Media Partners explored in our Sundance 2014 Infographic, the indie film world still has too much quantity and not enough quality.

Filmmakers, you can do that too. Zach Braff and his producing team modeled exceptional customer-relations in his hugely successful Kickstarter campaign for <em>Wish I Was Here,</em> premiering at Sundance on January 18. Crowdfunding is 40% about getting money, and 60% about developing a relationship with your audience.

4. Technology will offer unprecedented tools.  The newest generation of cameras will allow you to make creative changes after principal photography—you’ll be able to adjust focus, change the depth of field, and reframe with ease. 3D image-capture is becoming a consumer item. By the time Avatar 3 comes out, many of the visual effects of Avatar 1 will be at your disposal, and will be affordable on an indie budget.

5. Audiences are in for better experiences. Better visuals. Better effects. A whole generation has missed hearing uncompressed music, and the newest sound delivery systems will give full dynamic range: you will be able to share sounds as you want them heard, even on iTunes and mobile devices. Of course, just because the technology is here, it doesn’t mean you’re James Cameron or Rachel Portman. See # 2: You’ve gotta WOW!

6. Brands and creators are new best friends. Advertising agencies are not going away, nor are they lessening their role. But big brands want to have direct collaborations with creative talent, and agencies get it. That’s good news for filmmakers, and opens the door to sponsorships, promotions and more paid gigs.

From the invention of the first motion picture camera, technology has made filmmaking possible, and each advance allows more creativity to flourish. Yet storytelling is far more important than technology—a fact tech companies embrace. The key to success in technology and filmmaking really is quality. In a field of over-supply, where audiences have too many choices, and where new tools allow much easier and cheaper production, you have to separate yourself from the herd. Excellence is the great differentiator.

Could CES and Sundance be two sides of the same coin? I think so. We saw these CES 2014 takeaways in action in Park City back in January, and will continue to in the coming months – throughout the entire filmmaking community.